On 6 October 2017, our Dispute Resolution Officer, Cathryn Wolfenden’s Mum, suffered a massive stroke that has left her unable to communicate, move her right side or eat. This was obviously a massive shock to Cathryn and her family, and after spending hours online researching the condition Cathryn was keen to do something to help others in a similar situation.

In December 2017, Cathryn became aware of the Resolution Run Challenges, which are events organised by the Stroke Association to help raise funds for the charity and along with a friend she decided to take up the challenge. So, she signed up to the Resolution Run Manchester and downloaded the ‘Couch to 5K’ app! 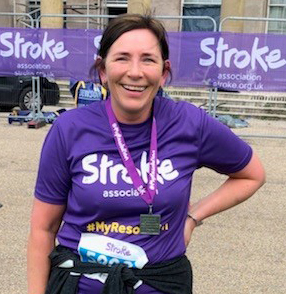 In Cathryn's words: "I must point out that I absolutely HATE running and will try to avoid it at all costs. Basically, I couldn’t run for a bus if my life depended on it! But, on 30 January in -3C and wrapped up like an Eskimo, along with a friend I made my way to Astley Park in Chorley to begin my training.

Our instructor was a Geordie comedienne who barked instructions at us, which at this point was ‘walk for 5 minutes, run for 1 minute and walk for 2 minutes – repeat 8 times’. Whilst struggling to breathe with bright red faces, we both agreed the run was a stupid idea and there was no way we would manage the 5K! But, we stuck at it, followed the app 3 times a week and it did get easier.

OK, fast forward to 29th April and having donned a purple Stroke Association t-shirt off we went, up what is known as ‘Angina Hill’ over tram lines and past the lake to hear the words ‘it’s only around this corner’. It wasn’t, but it nearly was!!

In a nutshell, we did it, 5.16km in 39.37 minutes and we raised over £700 for the Stroke Association, which we hope will help them make a difference to other sufferers and their families like they have for mine.

We were super proud, and it wasn’t as bad as we thought. We will not, however, be taking up running as a hobby!”

The products we protect at DGCOS are not limited to windows, doors, and conservatories, there's so much more... 🚪🛠️… https://t.co/juXrYwnk7j Via - Hootsuite Inc. - 4 Days, 23 Hours, 21 Minutes ago